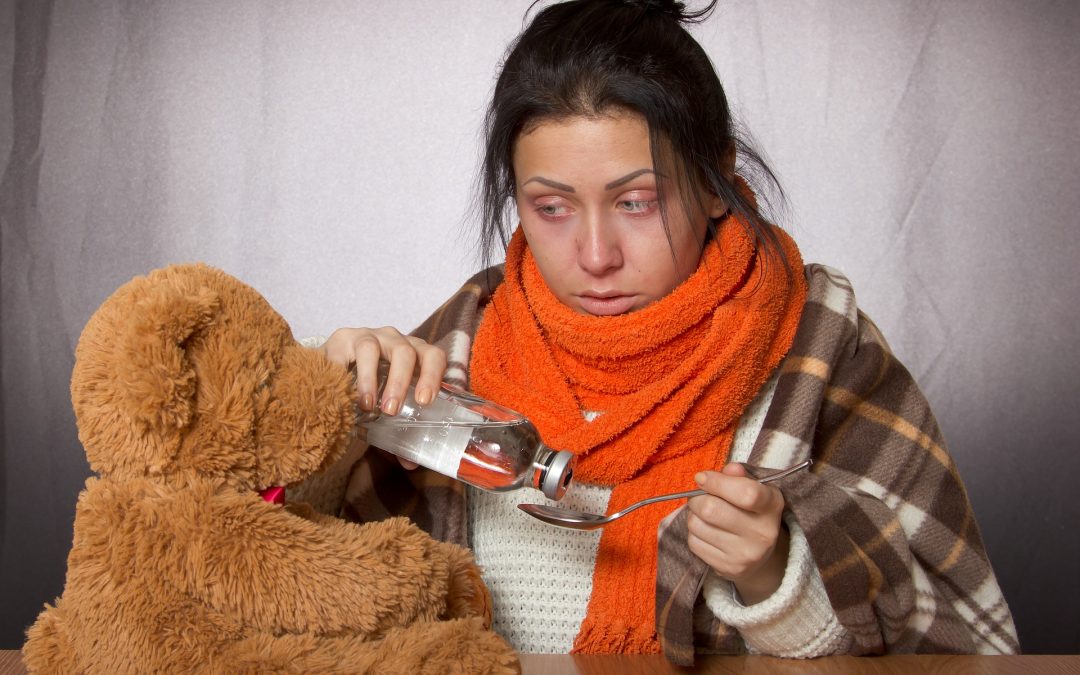 It’s that time of year again. Here in the UK the days are getting shorter, the weather is getting colder and wetter, and lots of people will start to suffer from colds or flu. Both of these illnesses are caused by viruses. Antibiotics cannot kill viruses, but they can have severe and long-term effects on the body, including the destruction of “friendly bacteria” in the gut. Yet many people still go to their doctors and demand antibiotics for cold and flu treatment. Here we take a look at the difference between colds and flu, and examine how homeopathy provides safe and gentle ways to treat them.

Colds are generally caused by the rhinovirus, which likes the cooler temperatures found in our noses. The spread of this virus reaches its peak in spring and autumn, which is why many of us are already experiencing sniffles and runny noses. The spread of flu viruses, however, reach its peak during winter.

Symptoms of Colds and Flu

Although there are similarities between the effects of the cold and flu viruses, flu symptoms are more severe and the onset is much quicker. Flu is very debilitating, causing us to be completely lacking in energy. Together with intense aches and pains, this can leave us feeling depressed and miserable.

This is a remedy for flu symptoms that appear suddenly and develop quickly. In many cases you find that the patient has recently been out in a cold, dry wind, which has taken their energy and weakened them. The onset and the symptoms are so dramatic that the patients are full of panic. They declare “I’ve never been so ill from flu before” or “There’s no way this is just a cold; I am going to die if you don’t do something”. There is a high fever which causes the patients to shiver, even though they are flushed and hot. They are restless, tossing and turning in the bed, not wanting to be left by themselves. You may see that one cheek is red, but the other is pale. They are very thirsty, demanding cold drinks which can then upset their digestion. Recommended potencies 30C or 200C.

Arsenicum patients will have clear, watery-looking discharges. They complain of a runny nose, particularly on the right side. The discharge is acrid and seems to burn the opening to the nostrils. No matter how much the nose runs, it is still blocked. The Arsenicum patient is extremely restless, changing position frequently or complaining about the position of their pillow, that the bed is not comfortable, etc. The head feels hot, although the rest of the body is chilly. If they complain of a headache a cold compress will bring some relief. The patient is thirsty for cold drinks, but takes the drink only in sips. The flu may spread to the digestive system, causing diarrhoea with watery stools. Recommended potencies 6C or 30C.

Belladonna is an excellent remedy for flu symptoms that develop very quickly and include a high fever. Often the face is hot and flushed, but the feet are cold. Sometimes the forehead can be so hot that it almost burns your hand when you touch it. Belladonna patients have severe headaches. They want the curtains closed and may complain about any noise. If you accidentally bump into their bed, they moan because the sudden jarring of the bed hurts them. Despite the fever, these patients will usually turn away from a drink, but sometimes they will crave lemonade or lemon cordial. (Belladonna people crave sour food and drink.) Recommended potencies 30C or 200C.

Bryonia patients usually want to be left alone “in peace” because any movement aggravates their condition. Even moving their head or turning around to speak to you makes the pains worse. Pressure can ease the pain, and the patients may hold their head in their hands or lie on the most painful side. Bryonia is particularly useful for colds or flu which involve a dry cough. Patients will press their hands against the chest as they cough, or wrap their arms around the chest. Any fever develops fairly slowly and can last for several days. Bryonia patients are often very thirsty and their tongues may appear coated white or yellowish-white. Recommended potencies 6C or 30C.

As soon as you think you might be going down with a cold or flu, take Ferrum phos. It works wonders at preventing the development of the symptoms into a full-blown attack. But take the remedy as soon as possible; it should really be taken during the first 24 hours. I work with children with learning disabilities, and one or other of them always seems to have a cold. Initially I seemed to be catching their colds regularly, but then I started taking Ferrum phos at the very first sign (which with me is usually a sore throat). It made an amazing difference. Recommended potencies 6C or 30C.

Gelsemium patients will complain of a tremendous feeling of weakness – the virus seems to drain them of all energy. Whenever there is flu that leaves the patient feeling physically and mentally exhausted and totally miserable, Gelsemium could be indicated. People who need Gelsemium often have a “hooded” look to their eyes, as they don’t even have the energy to lift the eyelids fully. They may feel alternatively hot and cold, sweating all over and then shivering. Gelsemium patients generally find that they need to urinate frequently, even though they don’t drink much. An unusual feature is that passing urine can sometimes relieve the headache. Recommended potencies 6C or 30C.

This is a great remedy for “head colds” with catarrh, a blocked nose and thick, gluey mucous. Sometimes the ears are also affected, with loss of hearing due to inflammation and catarrh in the ears. Often, the problem will start in one nostril and then, as that one seems to clear, the other nostril is blocked. The same thing can happen with the ears. First one ear is painful and has the most hearing loss, then the other one seems to get worse. I recently prescribed Kali bich for somebody who had a severe ear infection after a cold. The local doctor had given her a course of antibiotics. This had reduced some of the pain in the ears but had not cleared the catarrh or helped with the loss of hearing. Before the Kali bich tablet had finished dissolving under her tongue, the ears suddenly cleared and her hearing returned. In fact, her hearing was better than it had been before the cold! Recommended potencies 6C or 30C.

You’re in pain and you just want it to stop. You’ve got lots of things to do and you haven’t got time to be ill. You should be at work, or dealing with the kids, but this stupid illness has come just at the wrong time! You are so angry. This is Nux vomica.

Nux vomica patients are impatient and irritable. They hate sympathy and want to be left alone. They often continue to work even when they are ill and carry on until the cold or flu becomes so bad that they just have to give in. The illness may start with sneezing and thin, watery mucous (sometimes described as being similar to the white of a raw egg). As the flu develops, there can be headache, a blocked nose, fever with chills and pains in the back. The illness can spread to the digestive system, causing “stomach flu”. Recommended potencies 6C or 30C.