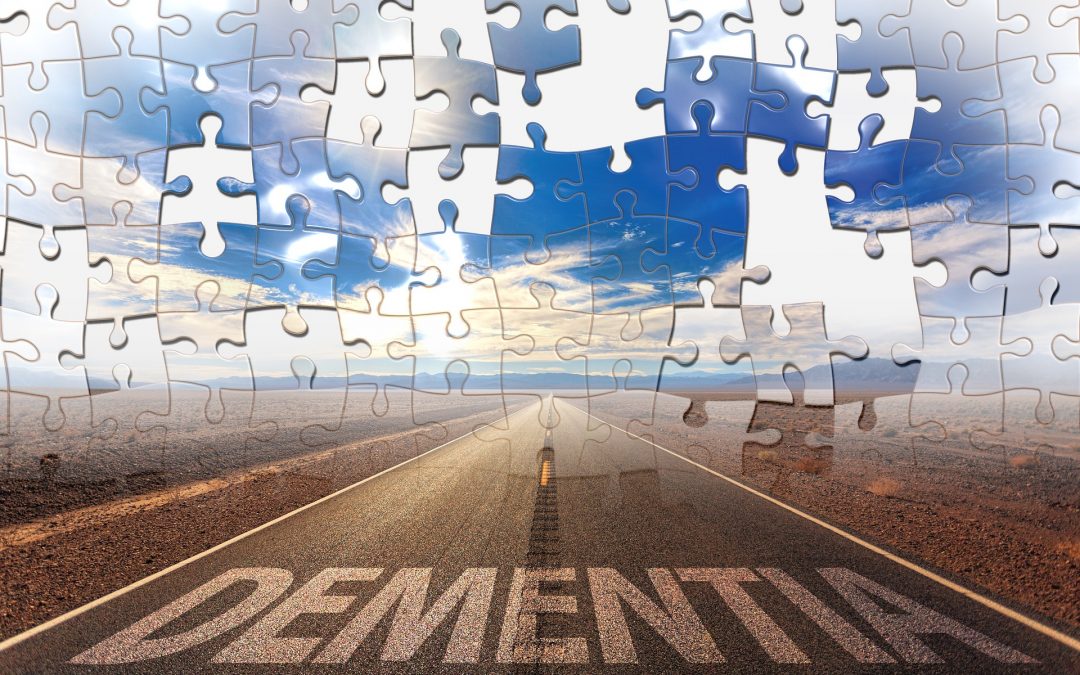 Dementia is one of the most pervasive medical problems in the world, with around 50 million people having been diagnosed. It’s likely that most of you will have been touched by dementia in some way or other; perhaps a relative or a close friend has dementia, or perhaps you fear that you might develop it yourself. Although elderly people are most likely to develop dementia it can affect people of any age. It appears to be more common in females than males, and statistics for Europe show an average of around 1.5% of the population of each country have some form of dementia. So what is dementia? The term actually describes not one medical condition but many. In fact there are over 200 forms of dementia, although the most common are Alzheimer’s disease, vascular dementia, dementia with Lewy bodies, frontotemporal dementia and mixed dementia. Amongst the possible symptoms are: Most of these symptoms can also be caused by other factors (such as stress, sleep deprivation, excessive use of alcohol, thyroid problems or infections). It is therefore important to obtain a proper diagnosis. Normally, a general practitioner will conduct some initial tests and, if the results suggest that the patient might be developing dementia, these may be followed by MRI or CT scans. There are a variety of homeopathic remedies that can be used to treat dementia, depending on exactly how each patient is affected by their condition. Here I introduce my choice of the best remedies available and describe the symptoms associated with each.

The remedy Alumina, or Aluminium, is perhaps the most well-known of the homeopathic treatments for dementia. It is an interesting fact that, in 1965, researchers discovered that high doses of aluminium caused rats to develop “tau tangles” in their brains. (Tau is a protein that is associated with Alzheimer’s disease.) This led to widespread concern that aluminium cookware could be linked to the brain disease, and in particular, to Alzheimer’s. Since then, scientists have insisted that such high levels of aluminium would have to find their way into the brain that even repeated use of such cookware poses no danger to health. Whether or not there is any direct link between aluminium in our food and toxic tau proteins in the brain, there is no doubt that the symptoms caused by high levels of aluminium are similar to those seen in dementia. It is these similarities that make Alumina (given in homeopathic potencies) such a suitable remedy for patients with dementia, and particularly those with Alzheimer’s disease. Patients who need Alumina are very absent-minded. They find it difficult to concentrate on anything and their memory is poor. They can appear generally slow and dull, especially when they first wake up, and can get very upset or angry if you try to hurry them along. As the disease progresses they become confused and disoriented. Alumina patients may be drawn to knives with an impulse to kill themselves or another person. (A lady described to me an event when her husband came towards her with a knife. He was smiling and saying “I’m going to kill you.” She replied “OK. But let’s have a cup of tea first” and managed to calm the situation.) Some patients display a fear of knives; they may be gripped by the same impulse to harm, but still have sufficient understanding to feel that this is wrong. This internal battle of wills causes great distress as the patients fear they are losing control. Physically, Alumina patients are often slow and unsteady on their feet. They shuffle or stagger as they walk. Their legs feel heavy and almost paralysed. The same paralysis affects the digestive tract and the patients can find it difficult to swallow and also to pass even soft stools. They can develop a craving for indigestible things such as coal or earth.

One of the main themes associated with Anacardium is that of duality; the patient is split into two personalities or feels pulled in two conflicting directions. This makes it particularly appropriate for patients who switch from periods of clear thought and normal behaviour to times when they do not recognise family or friends and appear extremely fearful or aggressive. At times they appear as if nothing is wrong with them. They are happy to see their loved ones and will talk easily about their plans for the day, what they have been watching on TV, places they have visited. On another day that personality seems to have disappeared and is replaced with somebody who yells “Who are you? Why am I here? I want to go home.” They lash out at their family members or their carer. They recognise nobody and are terrified that everybody wants to harm them. Anacardium has a terrible feeling of inferiority. In dementia this can manifest itself as a feeling that they have no control over their life. They know that their memory is weak and that they find it hard to make decisions. But they resent the way that other people seem to organise and control them. They want to choose their own activities and pastimes, but they can’t remember what they enjoy doing. When somebody offers a suggestion they are angry and abusive, often using bad language and even biting or spitting.

This remedy has been described as a gentler version of Anacardium. Like the Anacardium patients, those needing Baryta carbonica have no self-confidence. However, unlike Anacardium, these patients have often displayed an obvious lack of confidence and low self-esteem all their lives. Anacardium are strong-willed and even appear arrogant as they strive to hide their feelings of inadequacy. Baryta carb is often used as a remedy for children but it is equally relevant to adults who display childish behaviour. They are tremendously shy and, when approached or spoken to they may grab tightly onto the arm of their carer, or in some cases even hide behind them. As the dementia progresses they seem to revert to childhood. They wander around clutching a doll or a teddy bear. Once they feel reassured enough to talk to you they will tell you all about their toy – its name, what it likes to eat or drink, whether it has been good or naughty. The Baryta carbonica patients are generally very emotional. They can burst into floods of tears about the most minor upset. The cause of the tears may be so slight that you struggle to work out what has upset them. Baryta carbonica has a marked effect on the cardiovascular system. It affects the muscular walls of the heart and the blood vessels, causing palpitations, distented arteries and aneurism. It can therefore be a useful remedy for cases of vascular dementia.

Although known more for its use as a recreational drug, cannabis is gradually becoming more accepted as treatment for diseases that involve the nervous system. For many years people suffering from multiple sclerosis have claimed that cannabis helps to relieve stiffness and spasms in their muscles. In recent years there has been a campaign to make CBD products (which are derived from cannabis) available on the NHS to people who suffer from epilepsy as it has been found to reduce the frequency of seizures. The homeopathic remedy Cannabis indica is completely legal and available in the UK. This is because of the amount of dilution involved in producing homeopathic remedies. As you might expect from a substance that affects the nervous system (and in its raw form can create a feeling of euphoria as well as hallucinations) Cannabis indica has a profound effect on the mental state. It is a very important remedy in the treatment of dementia, particularly where there is tremendous fear of insanity. The patients know that their memory is failing and they are are terrified about what will happen to them. Cannabis indica has a very notable effect on the patient’s communication skills. People who need this remedy can be very excitable and talkative, and yet they have difficulty remembering words or phrases. This makes it seem as if they are gibbering and talking nonsense. They stammer or stutter as they speak. During a sentence they struggle to find the correct words, or even completely forget what they were about to say. They can’t finish the sentence or they seem to change from one subject to another before reaching the end. They have similar problems with writing; they have to stop mid-sentence because they can’t remember the point that they were trying to make. Either they write very slowly and haltingly or they scribble quickly but what they have written doesn’t seem to make sense. When they read all the letters on the page seem to blend into each other. Cannabis patients suffer from confusion and disorientation. They lose their way even when in familiar surroundings and can’t remember how to get home. In a care home they may wander around looking lost and afraid; they don’t remember where they are or have forgotten how to find their room. They can suffer from delusions and hallucinations and are often frightened of the dark.

Graphites is a remedy for cases of dementia where the patient suffers from severe short-term memory loss but the long-term memory is good. In fact, Graphites is typical of many dementia patients that I have met during my work in care homes. They are reliving past memories. They believe themselves to be children and wander from one room to another, asking “Where is my mum?” Or they imagine that they are in their 30s or 40s and are in the middle of their working life. They say “I have to leave in a minute. I have to go to the office.” or they describe over and over again the tasks that they used to do in their job. Because these patients imagine themselves to be in another age, they don’t recognise their own family members. They show no interest in their (grown up) children, because they do not fit the images that they have in their minds. They turn away from their husbands or wives because they imagine themselves to be youngsters and they have no memory of their spouses. This is how the “indifference” of Graphites can manifest itself in dementia. Graphites patients are usually very weepy and can sometimes be confused with Pulsatilla, especially as they are often overweight and like to be out in the fresh air. But unlike Pulsatilla they are chilly and complain about the slightest draught. Graphites affects the skin and these patients might also suffer from dry skin that cracks and bleeds. You will find their carers applying cream (often Cetraben) to the patients’ skin after bathing.